The G-Shocks have been joined in recent years by the Pro Trek line of sensor equipped watches, which have the ability to detect, depending on the model, ambient temperature, barometric pressure, and direction based on a digital compass. Casio’s most recent foray into the world of sensor equipped, information-centric watches also represents the very first integration of the watch toughening construction derived from the G-Shock, with smartwatch functionality: the WSD-F10 Smart Outdoor Watch.

One of the oldest makers of multifunction digital watches is Casio, which, over the years, has done things like moonphase and tide complications (in 1989) early touch screens (1991) fitness tracking (also as far back as 1991) blood pressure and heart rate monitors (once again, 1991) and one of the very first watches that could send you an alert when your phone rang: the VivCel VCL-100, which was released in 1994. And then, of course, there’s the G-Shock, which was originally designed to tolerate just about anything, and which since its birth has been redesigned again and again, to serve just about every special purpose imaginable. 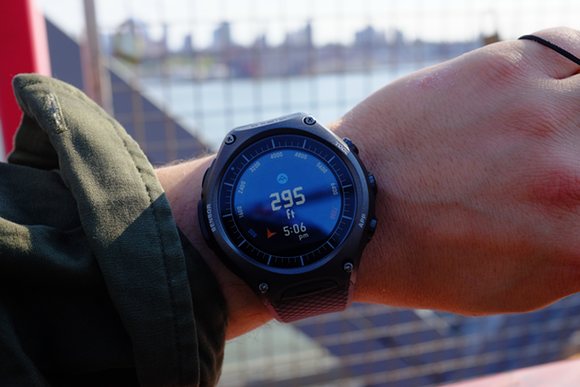 WSD-F10 was first shown at CES 2016, back in January.  Unlike many wearable devices, including fitness trackers and “connected” watches like those made by Mondaine and Frederique Constant, this is a true smartwatch, running Android, and capable of doing everything you’d expect an Android smartwatch to do, with all the usual bells and whistles including alerts, calendar functions, voice-activated Google search, the ability to run watch apps from Google Play, and so on.  However, it also has some very interesting physical features that set it apart from a lot of other Android watches – as well as some baked-in apps that make use of Casio’s mobile environmental sensor technology. 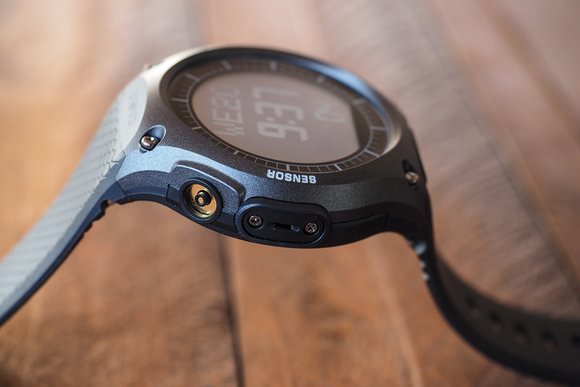 The case is quite substantial, to put it mildly.  This is a 61.7mm x 56.4mm x 15.7mm wristwatch, and obviously it’s designed for durability and functionality, not style per se.  The case is in compliance with MIL-STD-810, which is a general military standard for shock and vibration resistance.  It’s dustproof, water-resistant to 50 meters, and though tough, it’s surprisingly light (about 92 grams all told, including the strap).  Conserving power is a major priority for smartwatch designers, and to that end Casio’s designed a two-layer LCD display.  One is monochrome, easily visible in daylight, and consumers very little power; the other is an illuminated color display, which is useful for reading the time at night, and which is also used to view all the smartwatch functions, including the built in Tool app.  The processor, if you keep track of that sort of thing, is a Snapdragon 2100 with 512MB of RAM and 4GB of internal storage.

Battery life in typical use is about a day, which will vary depending on app use.  Surprisingly, for a company that makes extensive use of GPS technology elsewhere, Casio has chosen to not integrate a GPS receiver into WSD-F10, presumably with a view to improving battery life; however, the watch can piggyback on the GPS receiver in your phone.  There’s full compatibility with any Android phone in terms of functionality, but bear in mind that if you’re an iOS user, you’re going to be somewhat limited in what you can do. 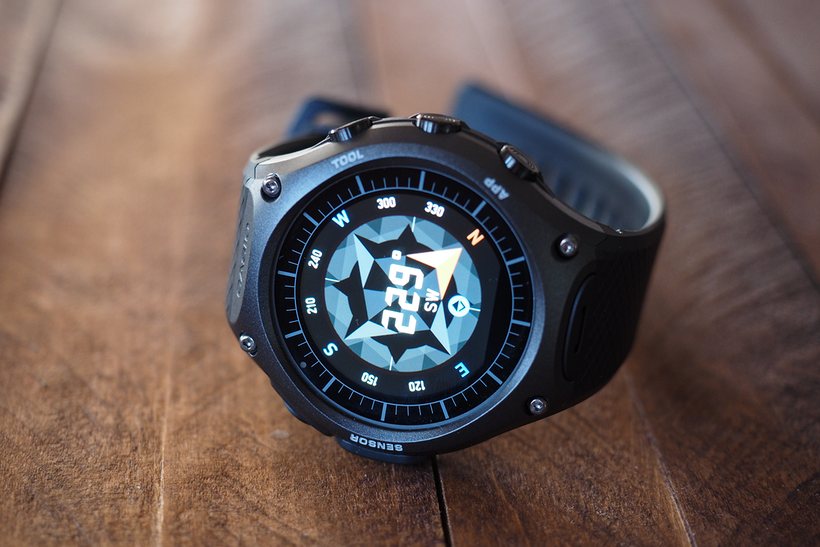 What you can do, whether you’re an Android or iOS user, is take advantage of the sensors in WSD-F10.  Unfortunately if you’re in iOS, you only get the basic suite: a compass, barometric pressure, and altitude, in addition to any Google alerts you’ve set up in the Android Wear app (and basics like agenda, stopwatch, alarms, and so on).  These, however, work well, though I would have loved to be able to use not only the compass, air pressure and altitude functions, but the tide graph and the sunrise-sunset times as well.

All these functions are, as we’ve mentioned, preinstalled as part of the Tool app, and moreover, are accessible through the dedicated Tool button on the right hand side of the case.  On the opposite side of the case is an aperture that at first looks like some sort of micro-usb port, but is actually the vent for the air pressure sensor.  Just above it is the port for the charger.  There has been some complaining about the proprietary power connector but that was probably an important part of getting 50m water resistance.

The charger attaches magnetically and it’s a little fiddly, tending to detach more easily than I’d like but it’s not a deal breaker.  Setting up the watch was very straightforward, and as an Android watch on iOS it worked just fine, sending calendar alerts, messages, and so on with aplomb, as well as dutifully tracking steps.  Still, the most fun was taking WSD-F10 for a weekend walk over a local landmark: the Williamsburg Bridge. 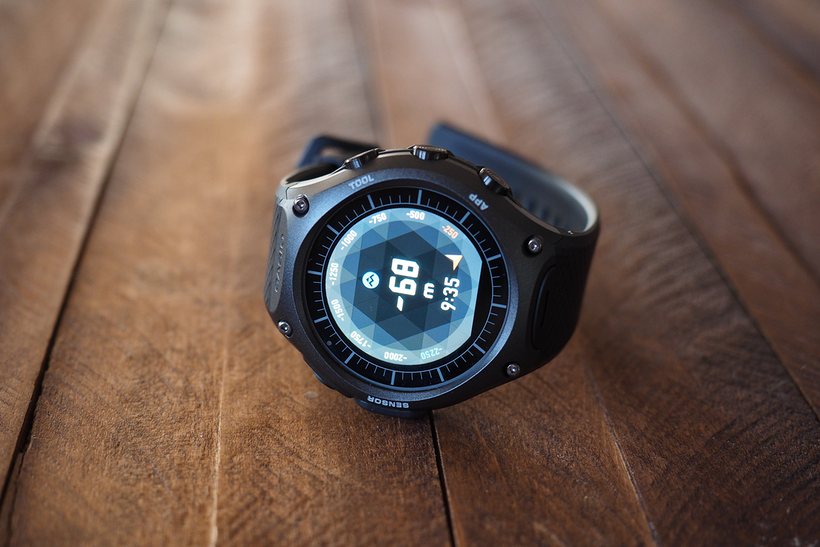 This was the altitude measurement along East River Park, before heading up on the pedestrian walkway of the bridge (if you’re not familiar with New York City geography, the Williamsburg Bridge runs over the East River from lower Manhattan to Brooklyn).

This was the altitude reading right in the center of the span, on the pedestrian walkway. The difference between the two is 135, and lo and behold the official height of the center span of the Williamsburg Bridge is 130 feet.  Pretty darned good resolution for a barometric altimeter.

Despite the limitations imposed by the use of iOS with an Android watch, I had a lot of fun with WSD-F10.  I suspect that its target audience (especially, of course Android users) will have fun with it too; despite the size it’s very easy to wear, and the sensors seem to all work very quickly and accurately.  (The steel construction of the bridge seemed to make the compass go a bit haywire but in the great, non-urban outdoors I presume this is a non-issue).

The only downsides that I can see to the watch are related to battery life, and to its reliance on a smartphone for GPS.  Outdoor smartwatches are a great idea but it’s inherent in their design to be pretty power hungry if you use them as intended, and this particular watch requires a proprietary charger, so if you want to use it for longer than single day expeditions, you’ll need to bring along a generator.  It’s designed for day-hiking, and shorter term activity oriented outings like cycling, kayaking, and so on.  For longer term activities, Casio’s solar powered Pro-Trek watches are a great alternative.  It’d be interesting to see a version of this watch that can charge off a portable cell phone/mobile device charger; paired with a smartphone in a suitably water resistant case, this could turn into a multi-day expedition timepiece.  In the meantime, though, it’s a solid choice for an athletically inclined weekend warrior.