I knew sharks the age of 7 and I can name nearly every species from memory. But, until I started doing some in-depth research on Michael Muller for this IWC article, I wasn’t even aware that he was known for his celebrity portraits of actors, musicians and athletes long before garnering acclaim as one of today’s premier underwater photographers. To me, Michael Muller was above all an American shark whisperer, born in 1970, who shunned the cage in favour of his camera, capturing hammerhead sharks and whales in his lens and putting the primary focus on great whites. 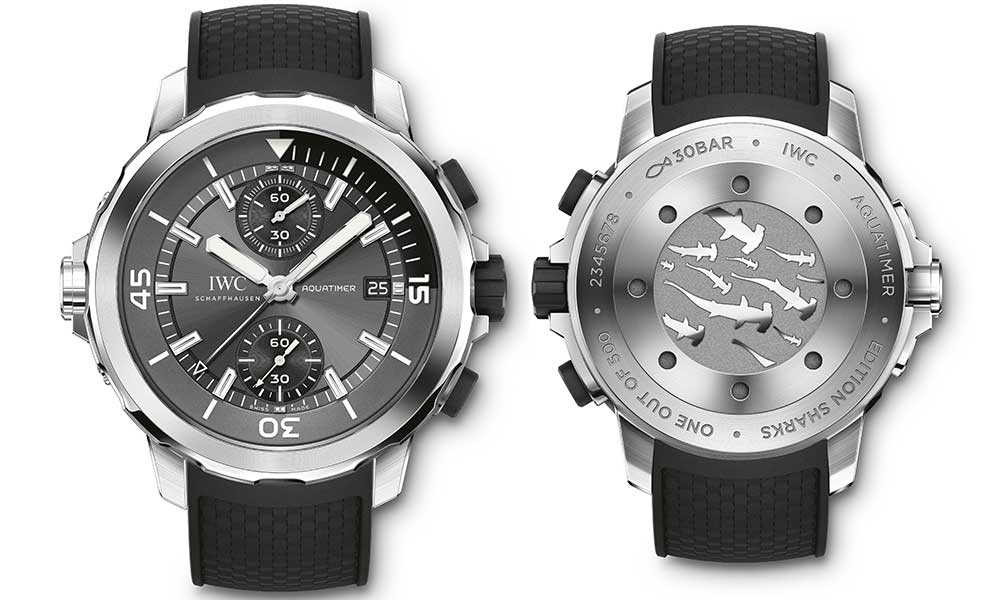 Mislabelled as terrifying monsters since the original Jaws in 1975, these huge sharks have unfortunately now fallen victim to overfishing. Among other parts, their fins are quite sought-after and the complete democratization of mass commercial fishing has reduced their food supply considerably. As protecting our oceans is one of the primary IWC missions, it was a natural choice to create the Aquatimer Chronograph Edition replica “Sharks” diving watch. Available in a limited edition of 500, each timepiece also comes with a signed copy of Michael Muller’s book entitled Sharks, packaged in a rusted metal cage replica.

As its name suggests, the fake Aquatimer Chronograph Edition “Sharks” is a diving chronograph that’s water-resistant to 30 bars, or 300 meters in depth, as substantiated by its robust 44mm diameter stainless steel case and double internal/external bezel for tracking dive time. Also in stainless steel, the case back features a medallion with an engraving of a school of hammerhead sharks.

The display features and functions of the fake Aquatimer Chronograph Edition “Sharks” are powered by the proprietary fake IWC 89365 calibre and the chronograph features flyback, automatic winding and 68-hour power reserve.