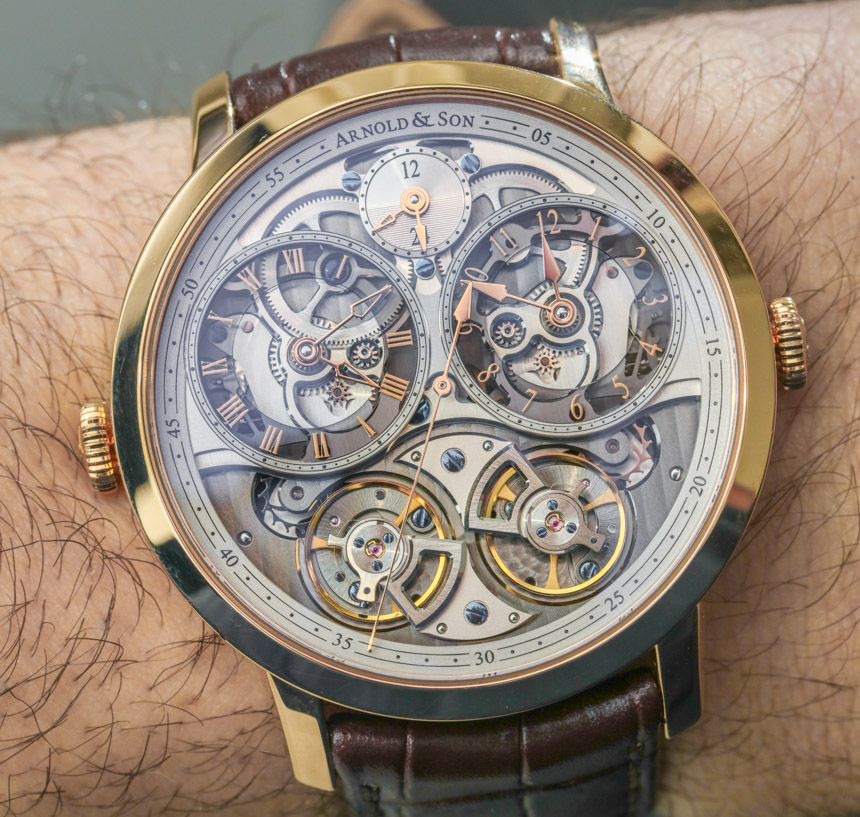 In recent years, Arnold & Son have released several pieces that are just marvels of watchmaking. Pieces like the Ultra-Thin Tourbillon Escapement (hands-on) and the Time Pyramid (hands-on) and this, the Arnold & Son DBG Skeleton watch, which offers a Double Balance and GMT complication (which is where the acronym DBG originates) along with an impressively symmetrical movement shown off in full with a skeletonized dial and exhibition caseback. This model was released for Baselworld 2017 and we shared our initial impressions here. Here, we’ll go hands-on with the Arnold & Son DBG Skeleton and explore what makes this watch tick, aside from, you know… the dual balances. 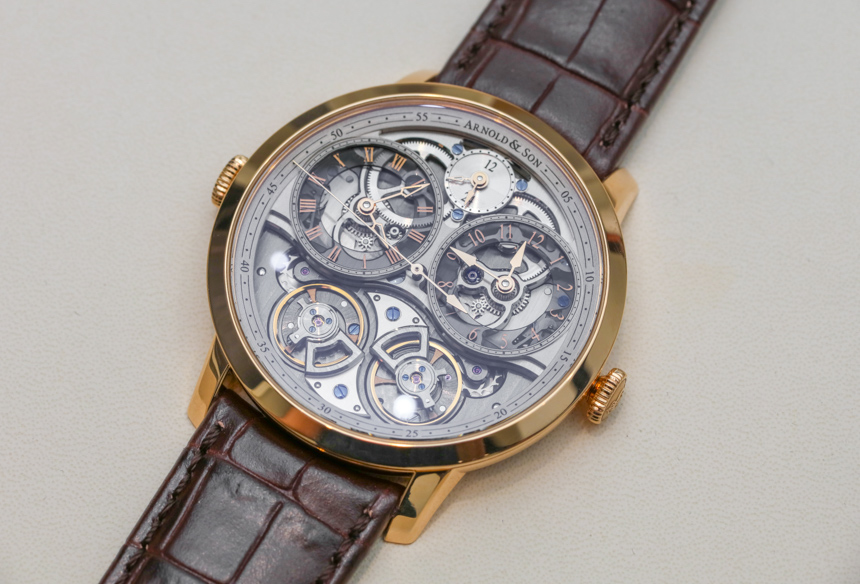 All images by Ariel Adams

When it comes to evaluating the significance of this watch, I consider it crucial to look at the brand’s history. Arnold & Son was founded in 1764 by John Arnold in London’s Strand. In the same year, he presented a half-quarter repeater watch mounted within a ring to King George III, which he followed up four years later with a gold and enamel minute repeater fitted with jeweled pivot holes, bimetallic temperature compensation, and a jeweled cylinder escapement. Arnold named this watch the “No. 1,” beginning a naming convention he would use for his most significant timepieces going forward. 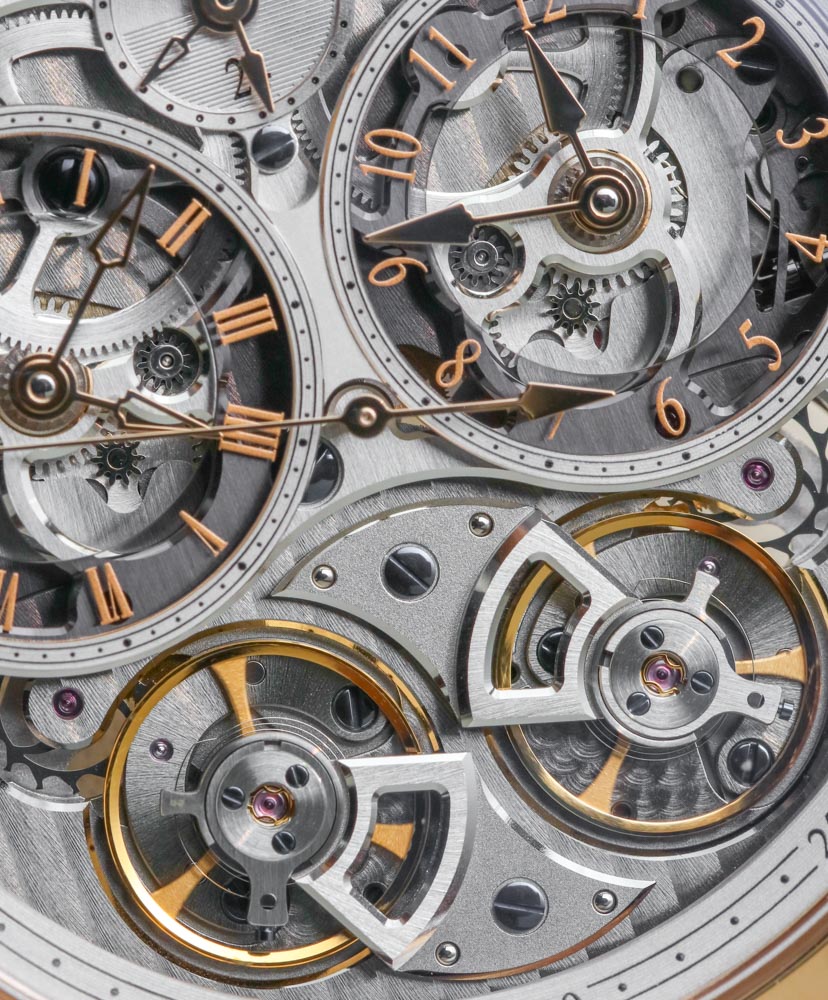 By 1772, an Arnold “No. 3” chronometer was aboard Captain Cook’s vessel when he set out for his second voyage across the Pacific, and Arnold chronometers would go on to accompany many other significant voyages over the following decades. His son, John Roger Arnold, began studying watchmaking under Abraham-Louis Breguet in 1792 and joined his father’s business four years later. Breguet became a great friend of John Arnold and the two collaborated on balance designs, the overcoil balance spring, and the tourbillon, although Arnold died in 1799 before this concept could be realized. To mourn his passing, Breguet presented his son with the first tourbillon escapement mounted in an Arnold pocket chronometer, which also bears a personal inscription and is today displayed in the British Museum in London. 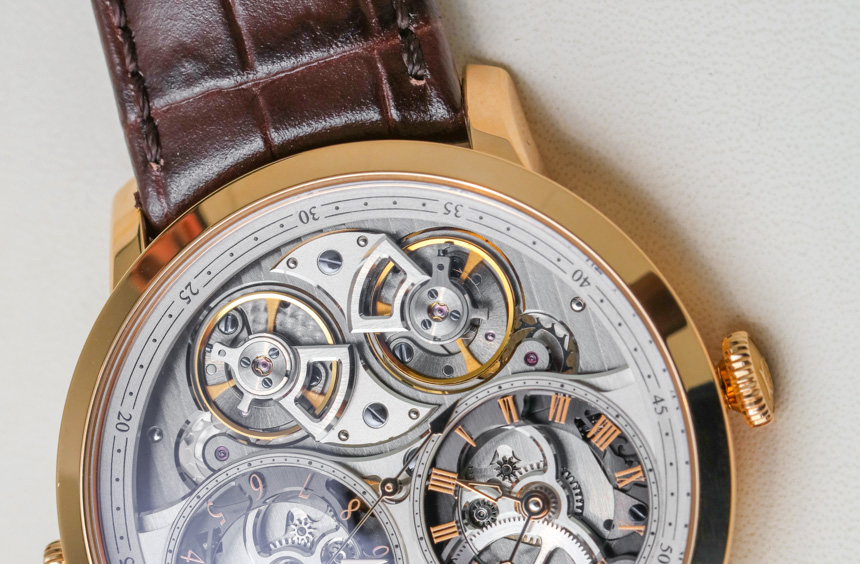 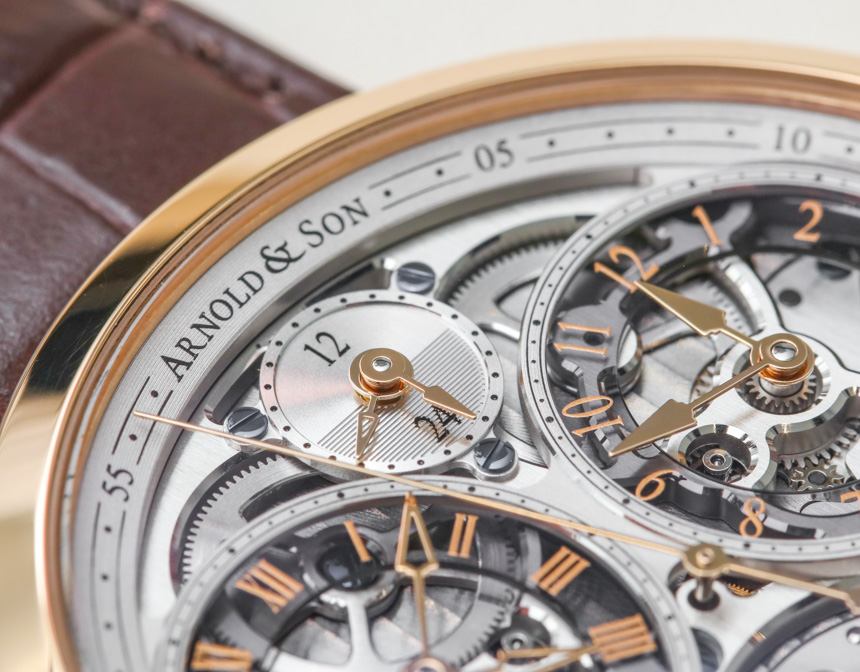 Although the modern Arnold & Son is now owned by the Citizen Group and has been revived in La Chaux-de-Fonds, Switzerland, the heritage of precision timekeeping, advancements in escapement technology, and Breguet’s influence can still be felt with this timepiece. The Arnold & Son DBG Skeleton essentially combines two movements, each with their own barrel, gear train, escapement, and balance, united by a single winding system and one centralized second hand. The two dials for home time and GMT are thus powered by their own dedicated movements, allowing each to be set independently via a dual crown system at 3 and 9 o’clock. Coolness factor aside, this also has a practical benefit in being able to set GMT time to the minute, which is particularly beneficial when dealing with time zones offset by half an hour such as parts of India, Australia, and Canada. 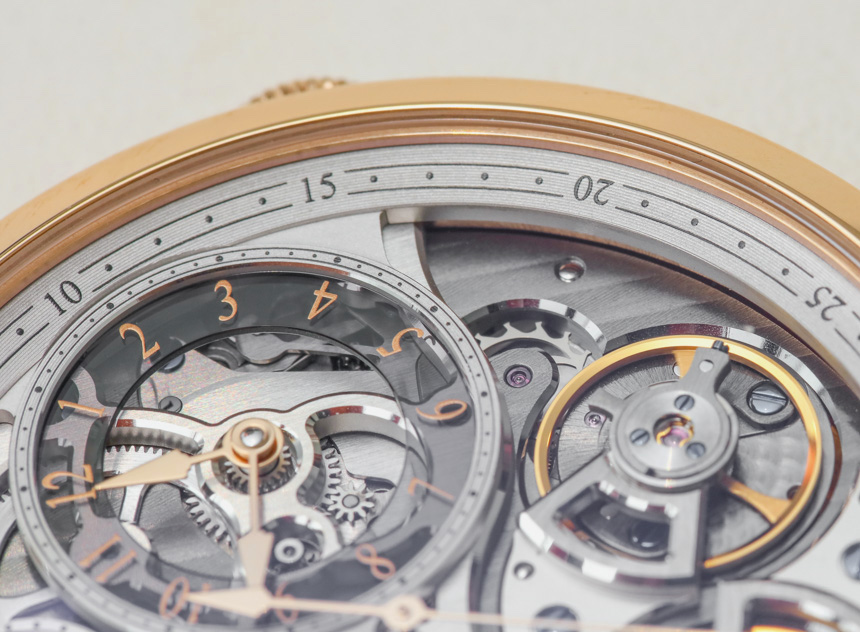 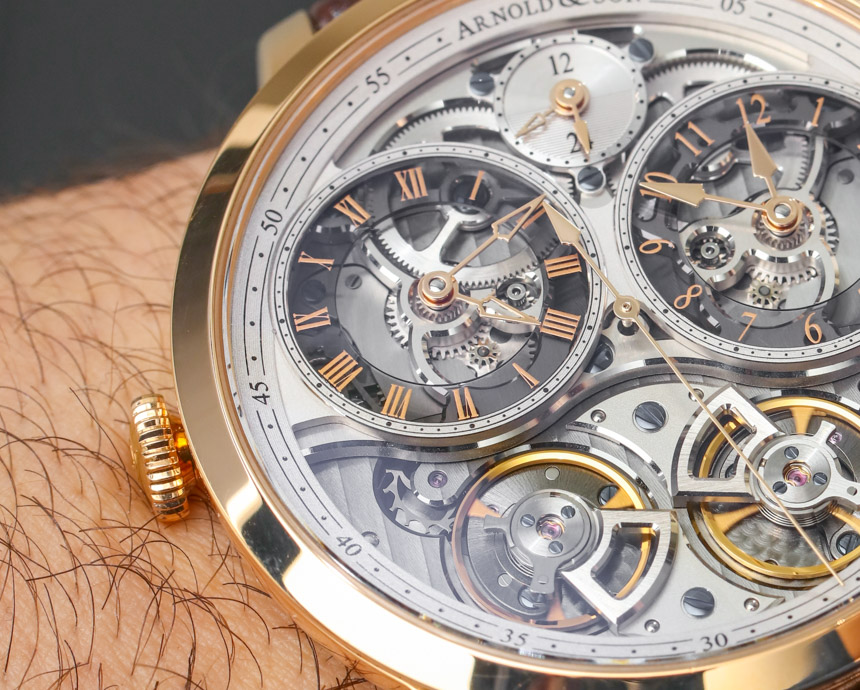 In comparison to the non-skeletonized version of the Arnold & Son DBG we reviewed previously, this incarnation sacrifices some legibility in order to better display that beautifully symmetrical movement. A ring of smoked sapphire crystal glass is employed for each dial to help bring the numerals more into focus against the busy background without completely obscuring it, which is a clever move. GMT time can also be differentiated via the dial’s use of skeletonized hands and Roman numerals, versus the Arabic numerals and solid hands featured on the home time dial. Unlike the previous version, the hands on the Arnold & Son DBG Skeleton are gilded rather than blued, which is visually a nice complement to the exposed balance wheels but also makes them difficult to see at a glance. 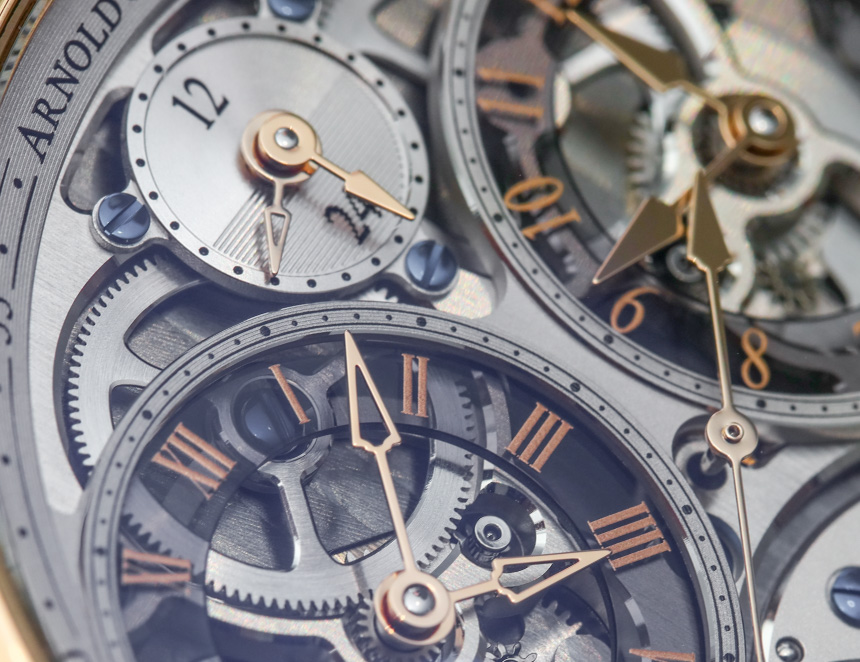 At 12 o’clock is a day/night indicator for both GMT time and home time, using matching skeletonized and filled hands to tell them apart. The bottom half of the indicator is striped, which aids the visual representation of the “night” portion of the disc. I do wish the Arnold & Son logo had been located elsewhere though, as its position interrupting the seconds track at 12 o’clock could make precise time-setting difficult. Another niggling issue I found was that the second hand counterweight closely emulates the look of the home time hands, which can occasionally cause a moment of confusion when you glance down and see three hands pointing at that dial. In an ideal world, I would have loved to see the minute hands on each dial extended just a tad further to properly reach the minute track, and the hour hands shortened a tad to not overlap the hour markers, but this is a minor aesthetic qualm which doesn’t impact utility. 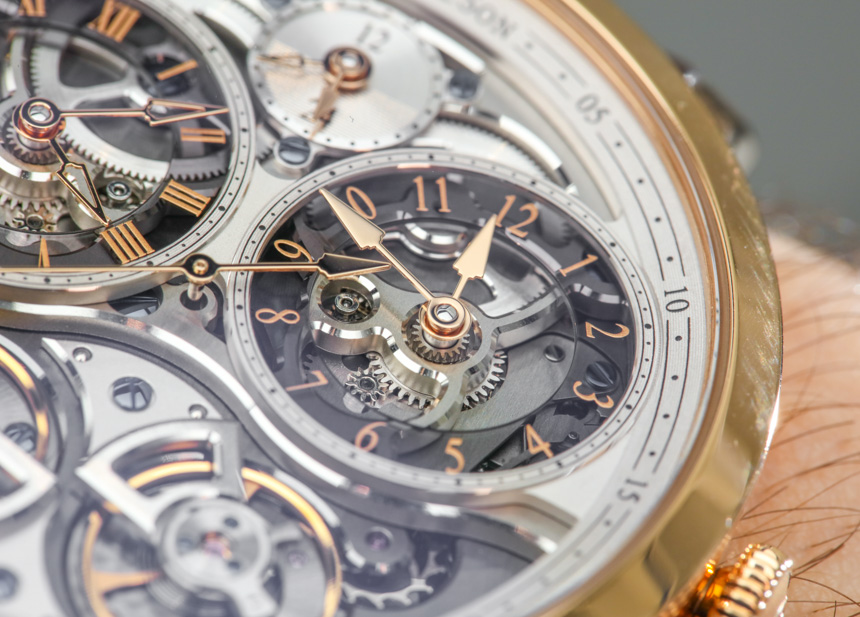 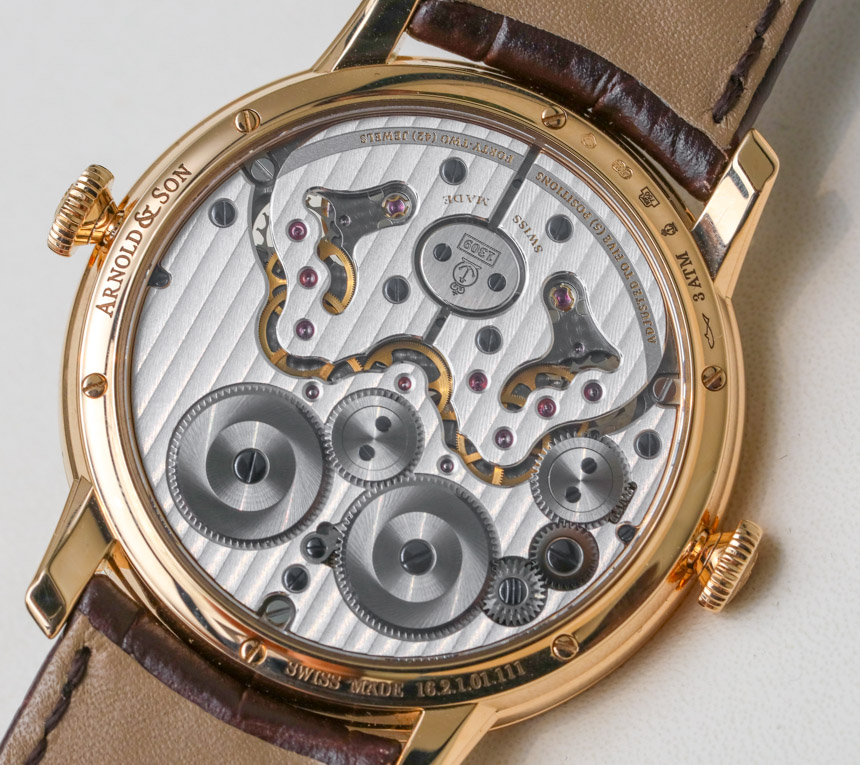 On the reverse side of the Arnold & Son DBG Skeleton, the base plate of the manufacture caliber A&S1309 is revealed. The movement is made of nickel silver (also known as German silver or Maillechort, an alloy of copper, nickel and zinc) that has been rhodium-plated and decorated with Côtes de Genève. The wheels are satin-finished and provide a contrasting three dimensional texture to the base plate, and between the chamfered edges of the bridges, the golden gear train can be seen. The movement is hand wound obviously, which contributes to its thinness at a mere 3.9mm. It features 42 jewels and offers a 40 hour power reserve while the twin balances oscillate at 21,600vph, or 3Hz. This is undoubtedly a highly refined movement, but compared to the depth of detail offered by the skeletonized dial, the reverse side of this movement almost feels like a letdown. 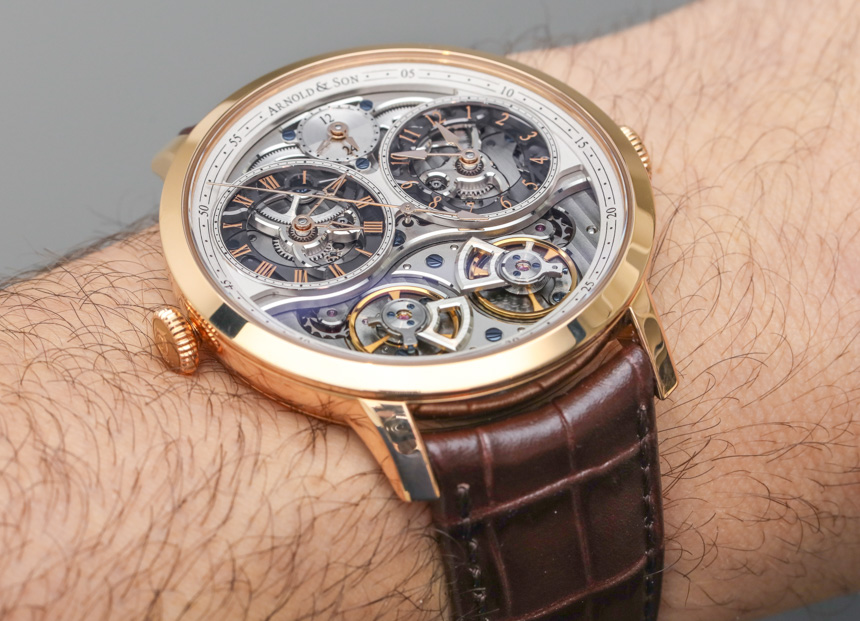 Despite the large 44mm case, the Arnold & Son DBG Skeleton wears quite well, with its slim 9.89mm profile easily slipping under a shirt cuff and the tapered lugs nicely hugging the wrist. The case is made of 4N rose gold and the sapphire crystal has anti-reflective coating on both sides to help eliminate distracting reflections. The watch is water resistant to 30m, and comes with a hand-stitched brown or black alligator strap. My mind went to the Jaeger-LeCoultre Duomètre models, but where they offer twin barrels regulated by the same balance wheel, the Arnold & Son DBG Skeleton goes full monoblock mode for each dial, if the Hi-Fi analogy is in any way apt for describing a wristwatch. 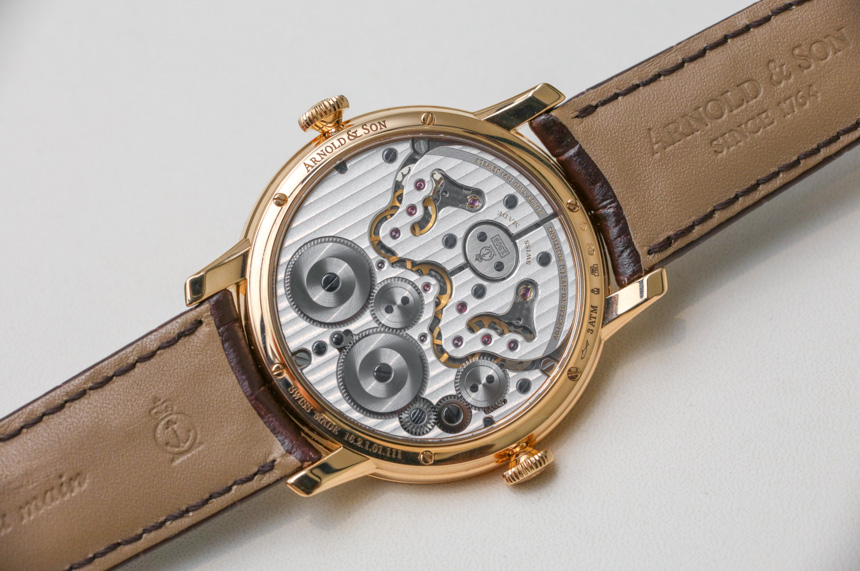 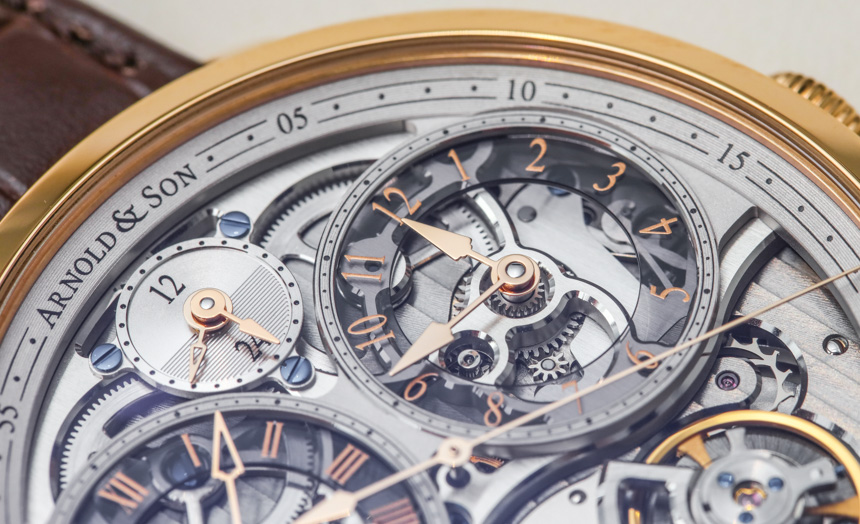 Minor legibility and aesthetic caveats aside, the Arnold & Son DBG Skeleton is a handsome watch that manages to walk the fine line between attention-seeking and refinement with its bold, yet slim case and gold-on-silver palette. A ton of functionality is on offer for travelers who can utilize the well-executed GMT complication, and lovers of mechanical watches are rewarded with views of those double balance wheels with every glance at the wrist. It’s great to see the historic name of Arnold & Son still producing timepieces which push the boundaries of movement design, and do so in a well executed, thoughtful way. The Arnold & Son DBG Skeleton watch is being offered in a limited run of 30 pieces, with an asking price of $38,850. arnoldandson.com

For Baselworld 2017, Arnold & Son unveiled yet another masterfully skeletonized watch that carries the brand’s conceptual DNA forward. The Arnold & Son DBG Skeleton is the most recent addition to the DBG (Double-Balance GMT) set which we reviewed the first, non-skeletonized version of in greater detail back in 2013. For all those unfamiliar with this particular piece, it’s basically two movements which share a winding system, housed in 1 watch. Skeletonized, this watch looks amazing and is the perfect example of Arnold & Son’s persistent progress.First, a tiny bit more about Arnold & Son’s DBG system. Every time screen is powered with its own barrel, using its equipment train, escapement, and balance, while sharing one winding system. Even though this isn’t necessarily unprecedented, due to the offsets of the shared components compared to the independent components, it isn’t always pretty, and rarely skeletonized. However, with the DBG Skeleton, we see almost perfect symmetry about the dial along with caseback.The unusual nature of the in-house A&S1309 movement permits for a few added mechanical and functional benefits. For instance, because of the separate barrel, gear train, and escapement/balance, the GMT purpose includes a “moments” hand rather than the standard 24-hour counter just. Each time zone screen in the Arnold & Son DBG Skeleton can be put to incremental quarters of this hour. So for some Indian, Australian, and Canadian time zones that are off by half-hours, for instance, the watch can account for this. Moreover, the Equation of Time screen at 12 o’clock decides the gap between each display, as well as whether it is night or day in the second time zone. The A&S1309 beats at 21,600bph and comes with a 40-hour power book.